The road to app-iness for Britain’s vineyards

Posted by Victor Keegan on December 31, 2014
Engilsh vineyards / No Comments
Warning: preg_match(): Compilation failed: unrecognized character after (?< at offset 10 in /web1/user42029/website/wp-includes/class-wp-block-parser.php on line 418 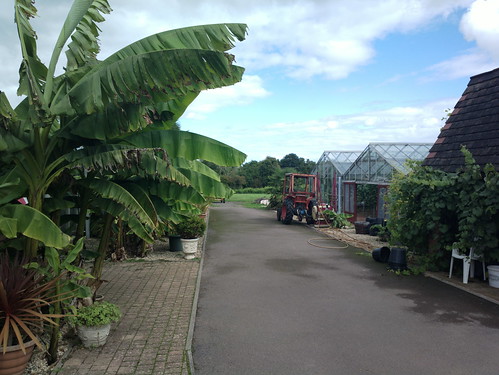 Britain’s rarest vineyard at Strawberry Hill, Glocs, has an acre under glass and banana trees

OK, it’s a new year and English and Welsh vineyards are on a roll. The challenging question is can this upsurge in popular interest be turned into a community of producers and consumers that would be mutually beneficial. One obvious route is to create a smartphone app that tells imbibers and tourists where the nearest vineyards are complete with directions how to get there and access to social networks to see what others think about the vines and wines.
There is no shortage of wine apps. I have a couple of dozen on my iPhone, about half a dozen of which I use regularly. Some, like the excellent ones from Berry Brothers and the Wine Society, enable you to search their corporate archives and buy directly from the phone if you want to. Berry Brothers even have educational videos. But they are mainly about imported wines.
If you want to employ some of the more exciting functions of a mobile phone – like identifying a wine from its label and telling you how much it costs – you will have to use an overseas app (mainly American) such as WineSearcher, Vivino or Delectable. These are very handy if you want to know in a restaurant whether you are being charged three, four or even five times the retail value of the bottle – simply point and click at the label and the price pops up on your screen often with comments from other users.
If you want to know where British vineyards are you can use the excellent UK vineyards map at http://ukvineyards.co.uk/vineyards-map/southeast/ which works best from a desktop computer.

But if you are on the move and want to know where the nearest vineyards are complete with directions how to get there you will have to use an American app like Winerypedia which in theory works around the globe. I noticed when it started that Chapel Down was on to it pretty quickly. I put up a few vineyards myself and others also started appearing. It accepts user-generated content so could be used as a UK community. It is no where near comprehensive yet but it is worth looking at because it shows what can be done with simple GPS technology. And it’s free.
The only English app I know of promoting a range of vineyards is one that was due in December from the South East Vineyard Association which represents many of the most successful vineyards in the country. I paid £2.49 for it at the online Apple Store a few days ago though it seems to have been withdrawn since. Hopefully, this will be to change it because it looks like being a sadly lost opportunity. 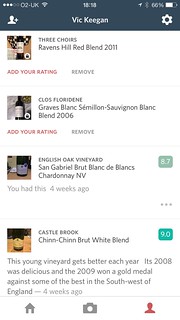 Entries from the Delectable app

Although there are some elegant pictures with text you can get a better (free) map from the UK vineyards offering mentioned earlier. There doesn’t seem to be a facility to see how far you are from a vineyard let alone getting directions. One of the aims is to raise money for the Association by charging £2.49  – but this simply won’t happen. Apps like this are nearly always free because of an entrenched reluctance by consumers to pay. I deeply regret this fact but it is true. Punters expect all but the most specialised apps (Hugh Johnson may be able to get away with it) to be free leaving the publisher to make money by in-app purchases, adverts or upgrades later. A vineyard app is not an end in itself but a means to promoting vineyards and selling wine. That is where the returns – and the community – will come from. It has to be free upfront.
Wouldn’t it be nice if there was a community-based app that gave you live directions to the nearest vineyard and enabled you to add your own comments and ratings and see what others were saying about UK wines – complete of course with a buy-button.
Ideally, such an app would be independent of any vested interests as it would obviously contain criticism as well as praise (Think Trip Advisor). Failing that the UK Vineyards Association and English Wine Producers should get together and do it in their collective interest.
It is surely better that we do this ourselves rather than yet again hanging on the coat tails of the US?