Did the English invent sparkling wine from their own vineyards?

Posted by Victor Keegan on November 16, 2014
Uncategorized
Warning: preg_match(): Compilation failed: unrecognized character after (?< at offset 10 in /web1/user42029/website/wp-includes/class-wp-block-parser.php on line 418 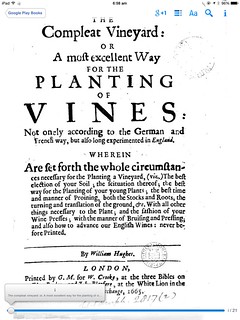 IT IS NOW well accepted, that the English invented what came to be known as the Méthode Champenoise thanks to Tom Stevenson’s amazing discovery of a paper presented to the Royal Society in 1662 by Christopher Merret of Gloucestershire. Stevenson’s assumption was that the English were using their sparkling wine technology to make imported still French wines fizzy.This couldn’t have happened in France because their bottles were so fragile they would explode during a secondary fermentation (and, anyway, they didn’t have corks). The English had a lead of at least 20 years in sparkling technology.

But could it be that the Brits were also producing fizz from still wine made from grapes grown in England? If so, this would mean that the current boom in home produced sparkling wine is merely a revival of something we pioneered from our own vineyards.
I have just been reading – thanks to Google scanning it – William Hughes 1665 classic, The Compleat Vineyard which strongly suggests that the Brits had been making sparkling wine out of home-grown grapes for quite a while.
Hughes admits that most of our wines were imported but he also points to
vineyards in Essex, in the west of England, and Kent, which “produce great store of excellent good wine”. Indeed the entire book is about growing grapes in England.

Among various suggestions, he says: “If the wine be not brisk, how shall we make it without the addition of Sugar, Vinegar,Vi?riol & to sparkle or rather bubble in the Glass”.

He has another suggestion for English wine: “Suppose you have a piece of Wine which naturally is too sharp for your drinking, you may draw it out into bottles, and in each bottle put a spoonful or two of refined sugar, and so set them in sand in a Cellar, and let them stand a considerable time before you drink it, and you will find it a pleasant and good Wine”
All this was contained in The Compleat Vineyard” which is a do-it-yourself manual about growing grapes in Britain. My edition was published in 1665. It must have been several years in the writing and printing and he must have been describing what were quite common practices. Isn’t it high time we celebrated this achievement more vocally to assist the success of our sparkling revival? There was an interesting conversation on Twitter recently suggesting that April 23 (St George’s Day and Shakespeare’s birthday) should be designated English Sparkling Wine Day. It would be a shame if it bit the dust.