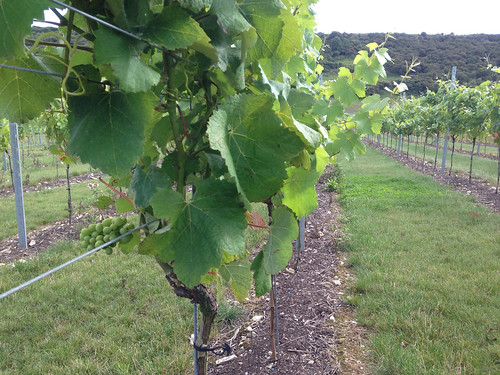 IF YOU want to speculate about the future of English sparkling wine look no further than the soft undulating hills of Rathfinny Estate in east Sussex, the biggest gamble in the history of this nascent industry. It has already had more publicity than most of the rest of the UK’s 400 plus vineyards put together even though it has yet to produce its first glass of wine. On a flying visit yesterday I had to content myself with a glimpse of the first grapes (see above) and I had to walk quite a long way down the vineyard even to see those. Cameron Boucher, the highly experienced vineyard manager from New Zealand (below) says they have already planted 150 acres of the 400 planned which would make it the biggest vineyard in the UK and one of the biggest in Europe. He says the first of the smaller quantities of still wine will be produced next year, though it may not go out under the Rathfinny brand. It will be several years yet before its flagship sparkling has matured in bottle long enough to be released on to the market. 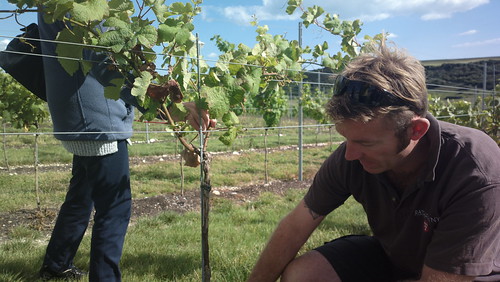 Mark Driver, who left a lucrative job in the City to plough £10 millions of his own money into Rathfinny, is in danger of giving hedge funds a good name. He is nothing if not ambitious, planning to go from scratch to selling a million bottles of English sparkling against the established giants of Champagne about 90 miles across the channel who share the same chalky geological strata as Rathfinny.Some people think he is barmy, others that he will usher in the next stage of the English (and Welsh) wine revival as it ups its game from a niche product to a serious industry. Having in my previous career as a journalist chronicled the remorseless decline of the UK’s manufacturing base over 40 years, I find it refreshing to observe a fledgling industry with such juicy prospects.Of what other industry in Britain could it be said that it has a world-class product yet barely one per cent of its domestic market? Most of the wine produced in Britain is sparkling and we regularly win top honours. In the recent prestigious Champagne & Sparkling Wine World Championships England scooped 11 gold medals and 14 Silver, more than any other country except France.Of course, it is not as simple as that. Vineyard guru Stephen Skelton (@spskelton) in his new book Wine Growing in Great Britain, points out that most of the growth in sparkling wine in the UK has come from Prosecco and Cava selling at well under £10 a bottle, a market that UK sparklers shy away from and that three quarters of Champange is sold at less than £20 a bottle which won’t leave much profit for low volume UK producers.But, if warmer summers persist, a larger output could bring unit prices down in Britain and nowhere more than Rathfinny which stands to reap economies of scale as great as any in Champagne and on land that is considerably cheaper. But two things will be crucial to its success: it has to produce wine that wins top medals and – something manufacturing industry never had to contend with – it needs a succession of good summers. 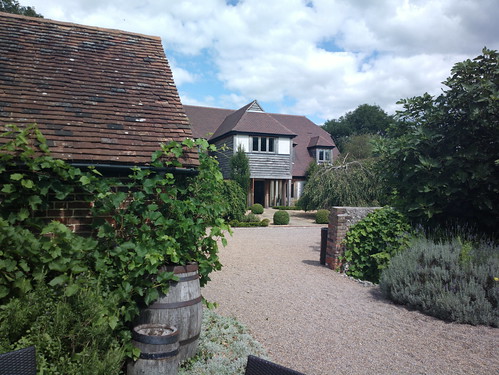 Before visiting Rathfinny we had our first trip to the long-established English Wine Centre at nearby Berwick  (left) which combines a shop selling a huge range of English (not yet Welsh) wines with lovely gardens, a hotel and a delightful restaurant serving a high standard of food which we enjoyed along with samplings of English wines of which the Nutbourne from West Sussex and Surrey Gold whites stood out for us.We decided to walk there from Berwick station along the Vanguard Way, a picturesque path along the slope of the downs which brings you out a few hundred yards from the wine centre. We were late as it took us a while to figure out that the path went straight through the middle of a field of closely packed with seven feet high rows of sweet corn where GPS is of limited use.

His London blog is LondonMyLondon.co.uk