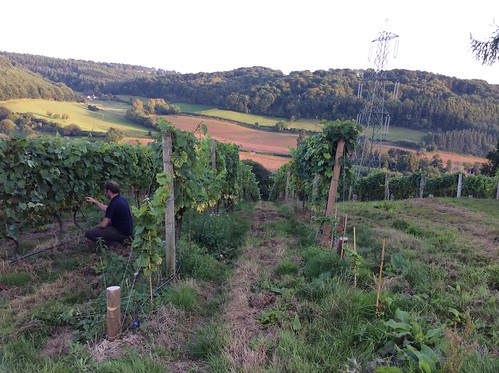 The historic vineyard at Castle Brook

HEREFORDSHIRE – where I spend a fair amount of time – could have been forgiven for feeling it had been dealt a raw hand by Bacchus. If only the county boundary line had been drawn a couple  of miles further out  in the south-west, it could have taken in the multi-gold winning Ancre Hill Estate in Monmouthshire. And if a few miles had been added on its north-east frontier  it would have bagged Three Choirs, one of England’s most successful operations.Herefordshire, however, still has some interesting vineyards and could be at the start of a roll. While I was  researching this blog – an arduous task supping wine at every stop – it was announced by the South West Vineyards Association that Castle Brooks’s Chinn-Chinn 2009  had won gold and been voted the best sparkling wine in the South West, an area that includes a lot of very prestigious estates. It is probably the only wine that can get away with calling itself Chinn-Chinn because that is the family name. Chinn, who are also the biggest asparagus growers in the country, have lived here near Ross-on-Wye for centuries.  Wine is still a minor crop for them but, as I saw for myself, they take great care of their lovingly manicured five acres set in beautiful countryside in a historic part of the county which was mentioned in the Doomsday Book and used to be on the path of a Roman road.Until Chinn-Chinn struck gold, Herefordshire’s main claim to fame was not quality but quantity. Sunnybank Vine Nursery in Rowlestone is the home of the National Collection of Vines with over 450 different types  – more than the rest of Britain’s vineyards put together.  I visited it yesterday on its annual Open Day  where owner Sarah Bell explained that the collection was under the watchful eye of Plant Heritage and was mainly aimed at enthusiastic amateurs who can buy cuttings or young vines for their own use. For easy growing and disease resistance she recommends Seyval for white wines  and Regent for red. 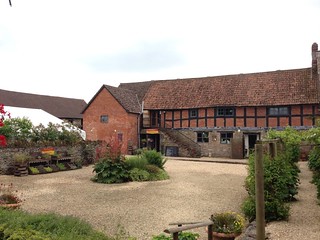 Broadfield Court (left) is one of the delights of the county, a charming country house  with 14 acres of vines and a cafe/restaurant where you can linger in the open air in summer with a snack or meal over a pleasant glass of wine (£3.50 a throw for their special reserve when I last paid a visit). It is the best all-round wine experience in the county.

But there are rivals kicking at its heels. Simon Day, who comes from the family that set up Three Choirs, recently bought the wine making equipment from Coddington vineyard in Colwall and has set it up in Ledbury where he will process Coddington’s wine  for the new owners while at the same time making wine from the  16Ridges vineyard in Worcestershire processing it in Herefordshire and selling it from the delightful Three Counties Cider Shop in the middle of Ledbury. Simon is also planning in the longer term to plant 20 to 25 acres (he has already done four acres) and to build a bigger winery. Watch this space.

Other Hereford vineyards include Lulham Court near Madley which  produces very pleasant wines(which can be purchased from the Coop in Newent)  from their three acres but at much higher prices that shown on their out-of-date web site. Beeches at Upton Bishop is a small vineyard run by John Boyd. Among others it supplies the neighbouring restaurant, the Moody Cow with its fine wine  while on the other side of Ross-on-Wye not far from Chinn Chinn Frank Myers and his wife Anthea Stratford McIntyre the European MP started a 3.5 acre vineyard three years ago in the gardens of their beautiful 17th century house and it will be another year or two before it is producing.

There are a number of other smaller vineyards which may grow bigger as Herefordshire stakes it claim in the amazing revival of the UK wine industry. 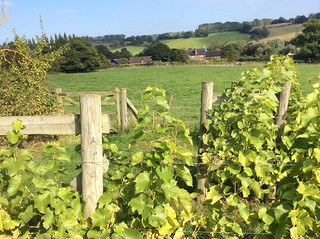 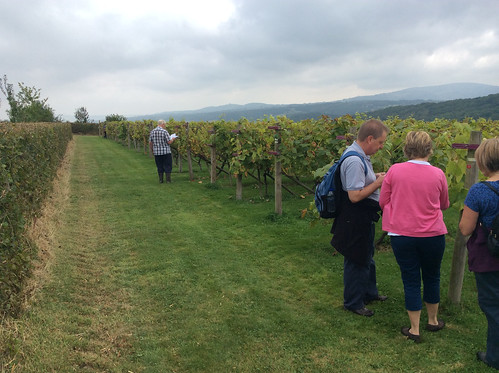